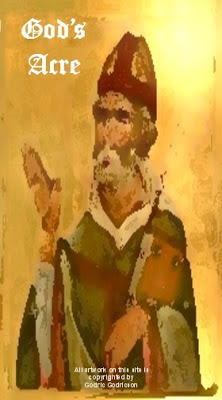 "It is believed to be a 'deviant burial', where people considered the 'dangerous dead', such as vampires, were interred to prevent them rising from their graves to plague the living. "

"It is well known that the victims executed as witches on Gallows Hill in Salem, in 1692, were thrown into mere shallow graves or crevices in the ledge under the gallows, where the nature of the ground did not allow complete burial, so that it was stated at the time that portions of the bodies were hardly covered at all. It was natural that the relatives of those thus cruelly put to death and left practically without burial, should, where they were able and courageous enough for the dangerous undertaking, remove the bodies to their homes for interment. It is the tradition that this was done in several cases, secretly and during the night, that it might not incur the opposition of the frenzied and deluded people. This removal was made by the children of Rebecca Nourse, and a beautiful monument now marks the spot to which her body was removed. There is a similar tradition in the Procter family, and there is good reason to believe that his body was removed in a similar manner. But if so, the necessary secrecy with which the sad duty was performed has caused the place where he was buried to be known only by the slender thread of tradition which I have mentioned."
Posted by Godric at Wednesday, October 31, 2012 0 comments
Email ThisBlogThis!Share to TwitterShare to FacebookShare to Pinterest
Labels: burial, Folklore, Procter, Salem, Witch
Location: Salem, MA, USA