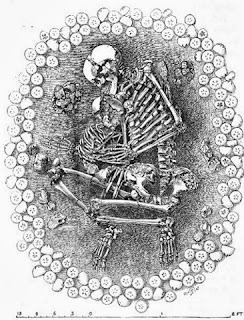 "Among some prehistoric graves disclosed at Dunstable was one containing the relics of a woman and of a child. The authorities suggest that the latter may have been buried alive with its mother, which is a proposition that one cannot absolutely deny. But there is just as great a possibility that neither the mother nor the child came to so sinister and miserable an end. Apart from the pathetic attitude of the two bodies, the skulls are as moral and intellectual as any modern ones, and in face of the simple facts it would be quite justifiable to assume that the mother and the child were not buried alive, nor committed suicide, but died in the odour of sanctity and were reverently interred. The objects surrounding the remains are fossil echinoderms, which are even now known popularly among the unlettered as fairy loaves, and as there is still a current legend that whoso keeps at home a specimen of the fairy loaf will never lack bread,[67] one is fairly entitled to assume that these “fairy loaves” were placed in the grave in question as symbols of the spiritual food upon which our animistic-minded ancestors supposed the dead would feed. It is well known that material food was frequently deposited in tombs for a similar purpose, but in the case of this Dunstable grave there must have been a spiritual or symbolic idea behind the offering, for not even the most hopeless savage could have imagined that the soul or fairy body would have relished fossils—still less so if the material bodies had been buried alive"