Carried to the other side

As soon as death had laid hands upon the victim, the relatives or friends, after gently closing the eyes of their loved one, inserted, in the dead man’s mouth, the obol, a coin valued at about three half pence, or about three cents of our money, which was to serve as passage money over the Styx. They were very careful not to overlook this duty, since it was believed that, if old Charon could not collect his ferriage, the unlucky shade would be sent back to life.
They also examined the coin closely, to see whether it would pass current among the inhabitants of the lower world.
An admirable verification of this custom was, in this century, excavated in the town of Samos in Cephallenia. A tile coffin dug up at that place was found to contain the bones of an initiate of the Bacchic mysteries and between the back teeth of the skull, thedanake, a coin, somewhat more in value than an obol, was still firmly lodged. The late excavations in Italy, Greece and Asia have revealed numerous coins in the tombs. The[22] painting on a vase, which is described by Pottier, shows a small coin held between the thumb and fore finger of the figure which represents the deceased. In the “Frogs” of Aristophanes, Dionysus is told by Heracles, who has returned from the lower regions, that he will be obliged to pay two obols as ferriage, since his servant, Xanthias, is with him.
Posted by Godric at Tuesday, October 06, 2015 0 comments
Email ThisBlogThis!Share to TwitterShare to FacebookShare to Pinterest
Labels: burial, Greece, sacred
Location: Athens, Greece

"....  burial was denied, or at least entombment with others was refused, to those who had been killed by lightning. This, from the modern point of view, seems more extraordinary than the other cases of forbidden sepulture that have been mentioned, but the ancients considered any one who was killed in that manner as struck by a god, who knew of some crime that had been hidden from mortal eye. Theseus, who was renowned for his piety, in speaking of those slain at Thebes, declared that he would burn the corpse of Capaneus apart, because he was struck by the flame hurled from Zeus’s own hand, but that he would burn all the others on a single funeral pyre. Plutarch declares that the bodies of those who have been killed by that means never putrefy, and that “many people never burn nor bury such bodies, but let them lie above ground with a fence about them, so that every one may see that they remain uncorrupted.” In some cases, on the other hand, the remains of these wretched beings were cremated and then interred. We must bear in mind, however, that the prohibition of burial or a separate entombment in the case of a man struck by lightning, did not necessarily signify disgrace, but was,[16] in a certain sense, indicative of distinction. His corpse was considered “sacred” or appropriated to the gods, and, as such, could not be dealt with in the conventional way."
Posted by Godric at Monday, October 05, 2015 0 comments
Email ThisBlogThis!Share to TwitterShare to FacebookShare to Pinterest
Labels: Ancient, Archaeology, burial, Greece, Greek Orthodox, Lightening, sacred
Location: Athens, Greece

"Those who destroyed their own lives became felons, but were not so hardly dealt with as those who had been executed for crime. Interment was allowed the suicide, but the hand which committed the deed was chopped off and buried apart from the body. A modern scholar attributes this treatment to the fear which the Greeks had that the corpse might become a vampire; but the sentimental reason of Josephus, that the felonious hand was considered alien to the body, appears much more like the ancient manner of thought. As an additional degradation to the corpses of suicides, Plato recommends that they be buried without honor apart from the other dead in an uncultivated and nameless region, and that their place of interment be unmarked by any pillar or name, From this suggestion and the fact that burials sometimes did take place after dark, as when Cassandra prophesied to Agamemnon that “being a base fellow, basely shall you be buried at night, and not in the day,” Becker has concluded that “the witching time of night” might have furnished the occasion for the entombment of self-destroyers. That is certainly reasonable".
Posted by Godric at Friday, October 02, 2015 0 comments
Email ThisBlogThis!Share to TwitterShare to FacebookShare to Pinterest
Labels: Greece, Suicide, superstition

"The Burial Customs of the Ancient Greeks"

"So stringent was the law concerning the duty of burial among the ancient Greeks. Yet there were extreme cases where burial was forbidden. It was the severest aggravation of the penalty of execution for a crime that the body of the criminal was denied interment. Such corpses, both at Athens and Sparta, were cast with the halter and their garments into a pit in an allotted quarter of the city, where the flesh might decay or be eaten by carrion birds. At Athens this barathrum, as it was usually called, was situated in the quarter called Melita, very near the house of Themistocles, and the temple which he had erected to Artemis Aristobule. Sparta also had a pit or underground cavern, called Caeadas, to which were consigned the corpses of malefactors. After the Lacedemonians had kept Pausanias confined till he was starved to death, they first meditated throwing his remains into this disgraceful place, but afterwards, changing their minds, they buried him in the ground somewhere thereabouts."
Posted by Godric at Thursday, October 01, 2015 0 comments
Email ThisBlogThis!Share to TwitterShare to FacebookShare to Pinterest
Location: Athens, Greece

"Familial and Common Graves When a person dies in Malta they end up either in a family or a communal grave. Family graves are seen as more respectable. Common graves (qabar komuni) are for people of a lower socio-economy class (it costs 200 euro/1000 Maltese pounds for a family grave), or for those who are not religious (Galea 2011). A family grave will normally have compartments for four or five coffins, but it can hold up to six bodies. There is space below for bones, which are put into plastic bags during “cleaning” by cemetery workers (Sean 2011). In the past flour bags were used instead. Each set of bones is then put into a box which is stored in the family grave. The boxes used to be wooden or tin, but now they use plastic (Victor 2011; and Vincent 2011). From the Hypogeum to the catacombs, communal graves have been a part of Maltese history. Graves of this nature seem to make the most sense in urbanized areas where space creates an issue. Although this is the case in cities such as Valetta, it does not apply to all of Malta, and is even less relevant in Gozo. It must therefore hold importance in the collective conscious of the people. One explanation is that a burial of this nature delivers the dead from “the isolation in which he was plunged since his death, and reunites his body with those of his ancestors” (Hertz 1960:54). Hertz is referring to a body’s transition from a temporary to a final burial place, but I believe that this is also relevant when discussing communal, at least familial, burials. Common graves may not be as respected as family graves because they contain the bodies of the poor and secular, but it may also be a result of the subconscious idea that the dead buried there are alone. This may be why, after two years, the bones from common graves may be removed and stored in crypts, or thrown down wells located on the cemetery grounds, while the bones from family graves cannot. "
Posted by Godric at Tuesday, March 03, 2015 0 comments
Email ThisBlogThis!Share to TwitterShare to FacebookShare to Pinterest
Labels: Addolorata, cemetery, Malta, vaults
Location: Malta


"Owning a grave does not mean that problems could not arise and is not a guarantee that a person will definitely be buried there. Mr Attard Kingswell explained that if a grave is not separated in sections, then a year has to pass between one burial and another. However, he said, most private graves have three compartments. The lower compartment is usually used as an ossuary - where the bones are put after the grave is cleaned - but could take up to one coffin. He explained that this compartment is sealed with stone slabs and burials usually take place in the middle compartment, which can take up to two coffins. The second level is also sealed with stone slabs so that the top level can be used if the necessary time frame to open the main compartment has not passed. He said that as long as the section was sealed off, and there were no coffins in the section being opened, a burial could take place at any time.
Posted by Godric at Wednesday, February 04, 2015 0 comments
Email ThisBlogThis!Share to TwitterShare to FacebookShare to Pinterest
Labels: Addolorata, Malta, tomb, Vault, vaults
Location: Malta

456. Negroes, Indians.—The fact that a man is a negro, Indian, or other racial human being, is not good ground to prevent his burial in a cemetery.
Posted by Godric at Thursday, January 08, 2015 0 comments
Email ThisBlogThis!Share to TwitterShare to FacebookShare to Pinterest
Labels: Indian, Negro, prevent, Race 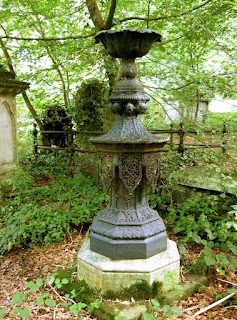 434. Nuisance, Public Health, Disease.—A cemetery is not a nuisance per se, but if it is proved that the burial of dead bodies in a certain cemetery does injure the public health and is a fruitful source of transmission of disease, the State may prohibit such burial at certain places within cities or adjacent to dwellings. But unless authorized by the Legislature a council has no right by ordinance to provide that no one shall be buried within half a mile of any habitation or public thoroughfare. And where the Legislature authorized a city to remove the bodies interred and allow streets through the land, it had authority to do so.
Posted by Godric at Tuesday, January 06, 2015 0 comments
Email ThisBlogThis!Share to TwitterShare to FacebookShare to Pinterest
Labels: Chadwick, Disease, Heath, tombs, USA, utilitarian

431. Well, Pollution.—And where a man had built a dwelling near a cemetery, it was not good ground for him to prevent the enlargement of the cemetery by showing that it might destroy his well. The court questions whether there is any legal ground for complaint for the pollution of subterranean waters when caused by the proper use without negligence of the adjacent premises. Additional lands may be obtained under the law of eminent domain by condemnation.
Posted by Godric at Tuesday, January 06, 2015 0 comments
Email ThisBlogThis!Share to TwitterShare to FacebookShare to Pinterest
Labels: Grave, water, well
Location: Maryland, USA

423.. Tombstones, Soldiers.—The United States will erect tombstones at the graves of soldiers who served in the Civil War, in all cemeteries where their graves are unmarked. Wherever the United States has jurisdiction over cemeteries, it has made it a criminal offense punishable by fine or imprisonment to deface a tombstone.757
[pg 223]
424. Indigent Soldiers, Tombstones.—Most of the States have statutes providing for the burial of indigent soldiers and for putting tombstones at their graves. The attention of relatives of deceased soldiers should be called to it.
Posted by Godric at Friday, January 02, 2015 0 comments
Email ThisBlogThis!Share to TwitterShare to FacebookShare to Pinterest
Labels: America, Graveyard, monument, soldier, Stele
Location: United States

The Clergyman's Hand-book of Law 1909

421. Statutes, Land.—There are sufficient statutory provisions on cemeteries to make a large book, and the frequent changes made in such laws render a full statement of the law impossible. The statutes against locating cemeteries near cities, dwellings, etc., should be carefully examined before buying land therefor.
Posted by Godric at Thursday, January 01, 2015 0 comments
Email ThisBlogThis!Share to TwitterShare to FacebookShare to Pinterest
Labels: America, Burial in Church, churchyard, Graveyard
Location: Maryland, USA
Newer Posts Older Posts Home
Subscribe to: Posts (Atom)