Posted by Godric at Sunday, May 13, 2012 0 comments
Email ThisBlogThis!Share to TwitterShare to FacebookShare to Pinterest
Labels: Edingthorpe, Hurn, Stele

The queries we have had to answer have been exceedingly numerous. Looking at the enclosure containing the console of the organ, a visitor wished to know whether the organist sat inside there. Another asked whether it was the vestry. One who saw great possibilities in such an organ inquired,  "Can he play this organ in any other place beside the key-board?" The pulpit being of so unique a character has had a full share of attention, and no lack of admirers. Gazing at it with eyes filled with wonderment, a woman said to her daughter, "Maria, you're not to touch not even the pews." Everything within sight of such a structure she held sacred. Astonished at its internal capacity, another asked, "Do all the clergy sit in it?" Not realising its true character and intent, a lady wished to know, "By whom was this monument erected?" As we had long since ascertained how impossible it was to please everybody, we were not surprised to find dissatisfied critics presenting themselves. One of this class said, "It looks like a tomb, and smells like a coffin." We append a few more questions we have had to answer:
"Was this church built by St. Nicholas?"
"Does this church stand in four parishes?"
"How many miles is it round the walls of this church?"
"How many does this hold? We were told it holds 12,000."
A clergyman asked, "Where are the bells? Are they in the tower?"
"Haven't you a Bible 3000 years old?"
"Haven't you a Bible that turns over its own leaves?"
"Who had the missing leaves of this (Cranmer's) Bible?"
"Is this the Bible that was chained in Brentwood Church?"
A lady pointing to the font asked, "Is that the Communion Table?"
An elderly lady at the brass lectern inquired, "Is this the clerk's seat?"
A man standing looking over the Communion rails wished to know, "What part of the church do you call this?"
"Was one of the giants buried in the churchyard?"
"Where is the gravestone where a man, his wife, and twenty-five children were buried? I saw it when I was here some years ago, and forget on which side of the church it is."
A young man gazing at the top of the lofty flagstaff just inside the churchyard gates, asked, "Was that erected to the memory of a shipwrecked crew?"

With such extraordinary exhibitions of blatant ignorance can a worthy clerk regale himself, but they must be very trying at times.
Posted by Godric at Thursday, May 10, 2012 0 comments
Email ThisBlogThis!Share to TwitterShare to FacebookShare to Pinterest
Labels: clerk 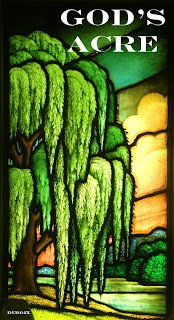 The Cemetery is a place of reintegration and of community and has been so from a period before the introduction of Christianity in . The dead are reincorporated with their compatriots and the sextons of the past ensured that the dead were stacked and layered to wait for their Resurrection.
The Trinity is a complex doctrine of the Christian faith that also implies at a Divine level a continuing integration beyond the understanding of humanity. The Trinity requires study and reflection to be fully understood and we need to bear in mind the idea of intermingling and integration to understand the doctrine. Denominations often have distinctive views of ‘The Trinity’ and often those denominational views are mutually exclusive and the object of intense debate. We often hate the things and ideas that are closest to us and accept ideas that are stranger and from further away. We can see a continuing development of the doctrine of The Trinity over time from a fairly limited statement of belief by the 4th Century Church at Nicea to a much more developed series of beliefs in the 21st century. The Trinity has become a sort of magic that is a test of orthodoxy and a trap for the unwary who speak without reference to the highly technical and specific language often used in the debate.
Many people initially hear about ‘The Trinity’ from Church services in the Nicene Creed which exposes people to the doctrine and emphasises the central importance of the doctrine.
“I believe in the Holy Ghost, the Lord and Giver of life, who proceeds from the Father and the Son, who together with the Father and the Son is to be adored and glorified, who spoke by the Prophets”. (Wilhelm, Joseph. "The Nicene Creed." The Catholic Encyclopedia. Vol. 11. : Robert Appleton Company, 1911.
The Nicene Creed sets out the very basic and unelaborated tenets of the doctrine without explaining that doctrine in detail and this ‘vagueness’ allows debate, confusion and conflict.
In response; The Roman Catholic Church tried to explain and codify the doctrine as part of the “Catechism of the Catholic Church”. Emphasising that the doctrine is a core  ‘mystery’; the Catechism teaches the doctrine in a ‘pithy’ style that draws upon the historical teaching of this particular denomination. Such a mystery relies upon God to reveal the mystery to others and cannot, in isolation, be understood by humanity with reference to reason alone. Equally, the Trinity cannot be understood without reference to the Incarnation. The catechism is a succinct  statement of doctrine that tries to free the denomination from perceived doctrinal error. The Catechism also introduces  specific Church terminology such as "consubstantial Trinity"  which are explained; although,  the explanation is sometimes so highly refined that it is inaccessible for the majority of congregations. Regrettably, humanity tries to understand The Trinity and the interwoven idea of God without thinking about how humanity itself is interwoven in death and for all eternity. Humanity is interwoven in death and in dissolution and although the imagery is sometimes macabre we need to hold onto that idea.
﻿ ﻿
Building on earlier explorations of the doctrine (and acknowledging that some Protestant denominations totally refute the doctrine); Karl Rahner (SJ) has written extensively in this area such as “The Trinity” (1967). Rahner  developed earlier intellectual statements of belief towards a  further refined perception and enhanced an understanding of this doctrine by exploring themes such as the “economic Trinity”  and the “Immanent  Trinity”. Such developments are intellectually complicated and sometimes esoteric although, ultimately, Rahner encourages thinking about the doctrine and it may be that this introspection and reflection may bear fruit as we consider the cemetery.
I would suggest that there are parallels in our consideration of The Trinity and our consideration of death and disintegration as such matters bring humanity together in the ground and in the ashes that we leave behind. Even if we have not lived together, we have the opportunity to coexist together for eternity.
Posted by Godric at Thursday, May 10, 2012 0 comments
Email ThisBlogThis!Share to TwitterShare to FacebookShare to Pinterest
Labels: burial, Humanity, Trinity