God as a novelist

The idea of God writing individual human activity like a novelist writing a role has its attractions and from this image we doubtless gain a real idea of a personal relationship to a God who is with us and we also develop, manifest and maintain the concept of a God who is with us over time. The author of our lives is there and we have a directing force as others also have a directing force.

Julian of Norwich doubtless had that idea of a directing and personal God when she wrote down her ‘shewings’ and she described her experience as being ‘enfolded in love’. For Julian, there is God who is a reality and God who can be known and who intervenes in our lives.

In a contemporary sense, the novel is a comforting and acceptable genre; although there is a problem in the idea of the novel  in that we are sometimes left with the idea that the novel must have a good ending. If we are in the novel then perhaps we must have a positive outcome? Regrettably, if we hold to the idea of a novel (and with God as the writer) perhaps hard issues and adverse circumstances are harder to bear?  if we believed that we would have a positive ending then a bad outcome is perceived with greater pain and sentiment. In believing that God is ultimately good then we believe that we will have a good ending. We believe that God directs and leads us and in this there is a temptation to give up free will and expect certainty rather than surprises.

Against this backfrop, we come up against hard ideas of human suffering. Why Me? We ask why God is not protecting us and we may develop ideas of worthlessness in a meaningless milieux. In perceiving God as a writer and having God in that paradigm has its disadvantages. God acts in the world and we accept that as people of faith and He speaks over time, however, we have a problem and I want to share that problem. I sense that in conservative or even traditionalist Christianity we perceive God as always being with us and interested in what happens to us. We are sometimes in despair when we see God as being absent  from our lives. How then do we talk to God about such occasions? How do we make representation to God?

I hear about past relationships and past pains and in all of this I hear questions. Why did that happen? The problem is asking God about that point in time. We have the concept of theodicy and I could discuss that with people. However, it seems that at some fundamental problem people do not have the words to simply ask God about issues and questions. If we are used to a directing and magisterial God how do we work up the courage to ask questions. Understanding about theodicy is not enough to people who cannot conceptualise asking God a question.  I have friends in the Reformed Jewish tradition who can ask questions of God and they ask “What were you thinking God?”. They “qvetch” and “plotz” about issues and in many ways this is healthy and is engaging with God. My Jewish friends have perhaps moved beyond being simple characters in the novel of their own lives and they have become more like interactive characters who want explanations.

God is the glue that holds the world  together but we have an increasing duty on us to interact with God as we move towards maturity. I know that metaphors are ultimately bound to failure but if I push this metaphor a little further;  we must increasingly learn to co-author the novel as we understand more about God and His world.

﻿ ﻿
Oh dear! The idea of boundaries and parish have come to mind as I visit parishes. Boundaries are fascinating although not always helpful in forming a community of the living or for the departed. People can be geographically ruled into communities and they can be ruled out of communities. Inclusion and exclusion are the words to be used in this debate. We have a lot of sociological material available as analytical tools and the work of social anthropologists is always helpful in looking at groups and ‘norming, forming and storming’ or whatever the phrase.

Churches, parishes and graveyards are not always easy to categorise when it comes to an explanation of how they actually are, how they came to be or how they are perceived. I use as an example a [nameless] Roman Catholic parish that I knew as a young person. It was always  a strange mix of local pride in itself and a long and colourful history; Polish/Czech/Hungarian Post-War immigration and the problems of having a priest who was himself a convert to the faith from a Reformed tradition. Throw in an occasional Latin Mass and a scandal or two and the Parish was often dysfunctional although on the surface it seemed to work in perfect harmony. The graveyard was a poor little thing crammed in against the walls and without care and attention.

Membership of the parish and the graveyard should have been wonderfully  multi-cultural although it wasn’t because the Czechs, Poles and Hungarians who had settled circa 1940’s to 1953 (ish) had assimilated (although not totally) and they wanted to retain some solidarity with each other and separateness to  others. English parishioners retained a romantic idea of being the descendants of rosy cheeked English men although it was clear from the surnames in the graveyard  that they were more likely to descend from Irish immigrants circa 1840’s onwards. The priest’s own history made him more right wing, punitive and reactionary as he tried to prove his devotion to the Church he had joined.
﻿
﻿ ﻿ ﻿

In effect, the parish had what are sociologically referred to as deep  ‘social cleavages’. The effect of such division was that whilst the descendants of the central Europeans played together quite happily at the same school with their ‘English’ counterparts; they sat separately at Church and the apparently English boys were implausibly sometimes called “Sean”, “Francis Xavier” and even  “Eoin”. Confusing! Well it was when the children from the traveller community started to attend the same school sometime in the mid 1970’s and brought in the minority use of the Irish language just as the bombings on mainland Britain made Irish people the source of suspicion. The Scottish families  whose fathers came to work nearby gave a slightly different and industrial mix to the parish. A friend at school had a father from Quebec and that brought even more spice to the mix.

The English in the local community could often not tell Scots and Irish apart based on accent and mannerism and so there was always a sort of ‘white racism’ being played out as local people tried to separate out the  ‘Gastarbeiter’ Scots who were really “One of us!” and the Irish/Travellers where there was a perception of mistrust and even fear.

﻿ ﻿
In a manner of speaking; membership of the parish was less based  on nationality, class, social origins or income and more about religious allegiance as this was a common point which to share. Less about Englishness and class and more about religious and cultural association and a willingness to be seen as “Catholic”. Good standing was through overt obedience to the Pope. As long as this was the case then membership was achieved and maintained. The problem came when the Church hierarchy started to actively (deliberately?) loose adherents as it started to preach about the 3 great moral sins for the Church - homosexuality, divorce and abortion.

The Graveyard became a place where we were all integrated into the communal unity of the living and the dead even if the hierarchy drove people away. The Maltese understand these matters better and the Cemeteries of Addolorata and Ta’Braixa have beauty and practicality combined in equal measure. The Maltese are another overlay in British culture but that’s another story for another day.
Posted by Godric at Friday, August 31, 2012 0 comments
Email ThisBlogThis!Share to TwitterShare to FacebookShare to Pinterest
Labels: Barbara, Kalkara, Malta, Parish 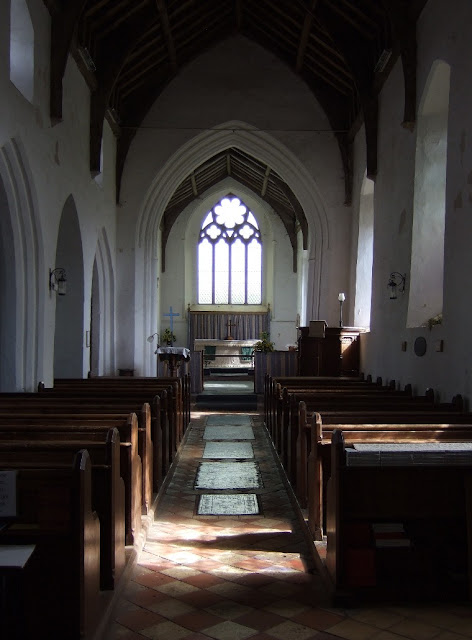 In my time visiting cemeteries I have never found such a large bone on the surface and in public view and this is quite shocking for England where we prefer our bones to be either under gound or in an ossuary. This picture is of a large bone around 10 inches long and it looks like a neck of femur. Any osteologists like to comment? I should say that I notified the Anglican parish about this find although they did not respond for reasons best known to themselves. I suspect that they already knew the bone was there but they couldn't be bothered to do anything about stray human remains.
Posted by Godric at Friday, August 31, 2012 0 comments
Email ThisBlogThis!Share to TwitterShare to FacebookShare to Pinterest
Labels: Human bone, Norfolk
Newer Posts Older Posts Home
Subscribe to: Posts (Atom)