"Westminster Abbey slowly became the place of sepulture for men who had claims to eminence other than the adventitious circumstance of royal birth. In the last year of the sixteenth century Spenser was buried in the spot now known as the Poets' Corner. Next followed Beaumont, Drayton, and Ben Jonson. It is, however, in the present century that the Abbey obtained the peculiar place in English history which connects it with the roll of supremely great Englishmen. Pitt and Fox were both buried there within the same year. Brinsley Sheridan was buried in 1816. To what strange uses the noble fane might still be put is shown on turning over the record by finding that in the next year there was buried in the Abbey a still-born daughter of their royal highnesses the Duke and Duchess of Cumberland. Grattan was buried here in 1820; Canning in 1827; Wilberforce, 1833; Lord Chatham, 1835; Thomas Campbell, 1844; Stephenson, 1859; Macaulay, 1860; Outram and Clyde, 1863; Lord Palmerston, 1865; Dickens, 1870; Lord Lytton, 1873; Dr. Livingstone in the following year, and Lord Lawrence and Sir Rowland Hill in 1879, whilst in 1881 Dean Stanley, who during the term of his deanship had watched over the building with infinite solicitude, had a place found for him in Henry VII.'s chapel".
Posted by Godric at Monday, October 01, 2012 0 comments
Email ThisBlogThis!Share to TwitterShare to FacebookShare to Pinterest
Labels: Burial in Church, Church, tombs, Westminster
Location: Westminster Abbey, Westminster, City of Westminster, London SW1P 3PA, UK

Rigobert was abbot of Orbais, afterwards bishop of Rheims, was favored with the gift of miracles, and suffered an unjust banishment under Charles Martel. He was recalled by Pepin, but finding Milo in possession of his see, retired to Gernicour, a village four or five leagues from Rheims, where he led a retired life in the exercises of penance and prayer. He died about the year 750, and was buried in the church of St. Peter at Gernicour, which he had built. Hincmar, the fifth bishop from him, translated his relics to the abbey of St. Theodoric, and nine years after, to the church of St. Dionysius at Rheims. Fulco,

Hincmar's successor, removed them into the metropolitan church of our lady, in which the greater part is preserved in a rich shrine; but a portion is kept in the church of St. Dionysius there, and another portion in the cathedral of Paris, where a chapel bears his name.
Posted by Godric at Monday, October 01, 2012 0 comments
Email ThisBlogThis!Share to TwitterShare to FacebookShare to Pinterest

A parish in Norfolk

Some seventeen years ago, shortly after taking charge of a parish in Norfolk, I was called upon to select a suitable spot for the burial of a poor man, who had been killed by an accident. After several places had been suggested by me to the sexton, who claimed for them either a family right, or some similar objection; I noticed for the first time, that there were no graves upon the north side of the church, and I, in my innocence, suggested that there would be plenty of space there; whereupon my companion’s face at once assumed the most serious expression, and I  immediately saw that fear had taken hold of his mind, as he answered with a somewhat shaky voice, “No, Sir! No, that cannot be!” My curiosity was immediately aroused, and I sought for an explanation, which I found not from my good and loyal friend, who would not trust himself to answer further than “No, Sir! No, that cannot be!” The sexton’s manner puzzled me greatly, for the man was an upright, straightforward, open-hearted, servant of the Church—but I at once saw that it would be fruitless to push the matter further with him, so after marking out a suitable resting place for the poor unfortunate man, who not being a parishoner of long standing, had no family burial place awaiting him, I made my way home to think over the whole occurrence.The cause for non-burial on the north side of the Church was indeed a mystery, yet that my parishoners had some valid reason for not being laid to rest there, was apparent; so I set about the task of unravelling the superstition, if so it may be called.

My library shelves seemed to be the most natural place of research, but here after consultation with several volumes of Archæology, Ecclesiology,  and Folk Lore, I could find nothing bearing upon the subject, beyond that in certain instances relating to Churchyard Parishes on the sea-coast, the north side by reason of its exposure to wind and storm, and being the sunless quarter of the burying ground, was less used than other parts; but here the reason given was in consideration of the living mourners at the time of the interment, and not the body sleeping in its last resting place of earth.

After some considerable correspondence with friends likely to be interested in such a matter, I was rewarded with information that, in some instances, the northern portion of the churchyard was left unconsecrated, and only thus occasionally used for the burial of suicides, vagrants, highwaymen (after the four cross road graves had been discontinued), or for nondescripts and unbaptised persons, for whom no religious service was considered necessary. Even this I did not accept as a solution of my problem. That there was something more than local feeling underlying this superstition, I was certain, but how to get to the root of the subject perplexed me.
Posted by Godric at Monday, October 01, 2012 0 comments
Email ThisBlogThis!Share to TwitterShare to FacebookShare to Pinterest
Labels: Folklore, Norfolk
Location: Norfolk, UK

Death is nothing at all 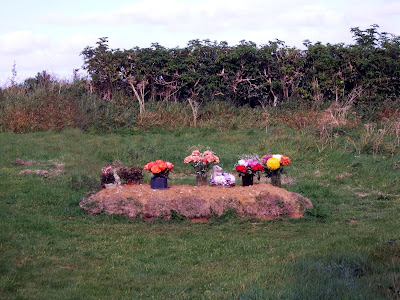 Death is nothing at all,
I have only slipped into the next room
I am I and you are you
Whatever we were to each other, that we are still.
Call me by my old familiar name,
Speak to me in the easy way which you always used
Put no difference in your tone,
Wear no forced air of solemnity or sorrow
Laugh as we always laughed at the little jokes we enjoyed together.
Play, smile, think of me, pray for me.
Let my name be ever the household word that it always was,
Let it be spoken without effect, without the trace of shadow on it.
Life means all that it ever meant.
It it the same as it ever was, there is unbroken continuity.
Why should I be out of mind because I am out of sight?
I am waiting for you, for an interval, somewhere very near,
Just around the corner.
All is well.