"To the memory of Thomas, the son of
Thomas and Ann Alderton, who departed
this life the 10th day of April 1767, in the
13th year of his age." 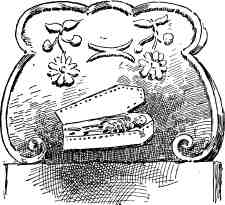 The same artist almost of a certainty produced both of these figurative tombstones. The handicraft is similar, the idea in each is equally daring and grotesque, and the phraseology of the inscriptions is nearly identical. I thought both conceptions original and native to the place, but I do not think so now. In point of taste, the first, which is really second in order of date, is perhaps less questionable than the other. The hope of a joyful resurrection, however rudely displayed, may bring comfort to wounded hearts; but it is difficult to conceive the feelings of bereaved parents who could sanction the representation of a beloved boy, cut off in the brightest hour of life, coffined and skeletoned in the grave!
Above the coffin on Alderton's headstone is an ornament, apparently palms. It is not unusual to find such meaningless, or apparently meaningless, designs employed to fill in otherwise blank spaces, though symbols of death, eternity, and the future state are in plentiful command for such purposes. Something like this same ornament may be found on a very old flat stone in the churchyard of Widcombe, near Bath. It stretches the full width of the stone, and is in high relief, which has preserved it long after the accompanying inscription has vanished. The probable date may be about 1650.