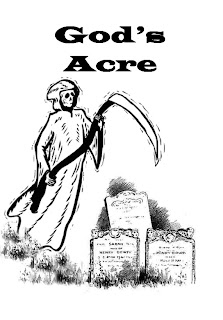 "Great excitement was caused in Yarmouth by the discovery that upwards of twenty recently interred bodies had been removed from the churchyard by resurrection men.  “The churchyard was quickly crowded by the population.  Wives were searching for the remains of their deceased husbands, husbands for those of their wives, and parents for their children.”  Three men, Thomas Smith, alias Vaughan, William Barber, and Robert Barber, were apprehended, and committed for trial at Yarmouth Quarter Sessions, whence, on April 1st, 1828, the indictment was removed by writ of certiorari to the Court of King’s Bench.  The case was tried at Norwich Assizes, before Lord Chief Baron Alexander, on August 11th, 1828, when only Vaughan (or Smith) was proceeded against.  Robert Barker turned King’s evidence, and described the method by which the graves were robbed, and how the bodies were sent to London by the wain.  A verdict of guilty was returned, and on November 14th, 1828, the prisoner was brought up for sentence in the Court of King’s Bench.  He urged that he was driven by poverty to the commission of the offence, and was sentenced by Mr. Justice Bayley to six months’ imprisonment in the house of correction at Norwich."