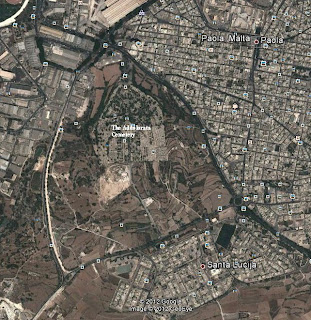 The is hidden away outside of Paola which is a short bus ride from Valetta. When I visited the cemetery it was 35 degrees centigrade and very dry. The dust clouds formed a haze that found its way into the mouth and up the nose. The Maltese bus drivers didn’t seem to know where the cemetery was located and had even less knowledge as to which bus stop I should use. This is a surprise becasue the cemetery is huge and the final resting place for many Maltese.

I managed to find the place easily enough and managed to cross the busy lanes of traffic that separates the blisteringly hot cemetery on the hillside from the population down below. The British neo-Gothic style marks the cemetery out from the usual baroque structures on the island. The formality of the entrance arch and the Church formed a backdrop that was impressive although it left me unprepared for the enormous cemetery that lay behind the walls. The burials are found in below ground mausolea capped by marble slabs and stele as well as above ground monuments. The marble used in the structures and monuments would fill an entire quarry. The cemetery is marvellous,  worth seeing and part of the 'world class' list of cemeteries that could be compiled. The usual names are found here "Azzopardi", "Caruana" and "Borg" are present and laid out in strict well maintained lines with their neighbours and friends.

Access to the cemetery is in ‘drives’ along the contours of the hill and when I was there a funeral was taking place with relatives making their way in large black cars. The Maltese understand the importance of funerals and the big black car behind the hearse is a well used metaphor on the island. The signs at the entrance were a shock because they were clearly forbidding photographs and I have to say that I was disappointed. There was so much to photograph although I follow the rules and if the sign says no photographs then there are no photographs. The temptation was great as there appeared to be no one around although I believe in behaving ethically when visiting burial sites. My apologies for the absence of pictures.

The burials are well laid out and protected, at least at the first glance, although on a closer inspection it becomes clear that some above ground structures have been damaged and items on the walls appear to have been broken and carried away. So much for the 'Marquis of this and that' who would find their monuments looking a little sad with a dry and flimsy wooden door revealing the walls now lacking ornamentation.Presumably ripped from the walls by thieves. The Maltese newspapers carry stories about thefts from tombs and I think I saw the brutal evidence of such thefts.

﻿
﻿ I looked inside the metal grills of various funerary chapels and found no inhumations with all burials being decently below ground. Unfortunately, The dry heat eventually took its toll and after an hour or so wandering amongst the monuments, I had to leave for the bus back to Valetta and a cold drink.

On the way out of the cemetery, I asked for the section maintained by the Commonwealth War Graves Commission although the caretaker didn’t speak English and he seemed a little blunt even when speaking Malti to other visitors. I should say that the photograph alongside this comment was taken at Kalkara.